In today’s guide, we take a close look at two of Samsung’s biggest selling smartwatches.

The Samsung Galaxy Watch has taken the best bits from all previous designs to become the ace in the pack, but how does it differ to the Samsung Gear S3?

Today, we pitch the Galaxy Watch vs the Gear S3 to see which Samsung smartwatch is the best fit for your wrist.

First things first, these watches are separated by 3 years which is a long time in the world of tech.

As always, future compatibility is always an issue, and buying older tech means you run the risk of becoming unsupported by updates in the future.

Samsung has a good rep here, though, so you should be fine with either of these watches as far as longevity goes, though the Galaxy Watch will likely be supported for longer than the Gear S3.

Both of these watches are available as standalone devices. That means they both have a SIM card that enables them to connect to your carrier’s network.

Neither of these watches uses physical SIM cards, though. Instead, both have the modern eSIMs or embedded SIMs, which are permanently-installed SIMs.

These watches, like most smartphones, are sealed up and can only be opened by professionals, largely to meet waterproofing standards.

Smartwatches and Your Carrier

Smartwatches are usually purchased via your carrier paid for using monthly installments like phones. They essentially ‘bolt-on’ to your existing plan.

Your carrier will perform a number sync process to connect your smartphone contact number to your smartwatch. This means whenever someone calls you, both will ring, or only one or the other if you prefer.

The key difference between standalone watches like these and watches that need to tether to your smartphone via Bluetooth is that they work without your device being present.

When we pitch the Galaxy Watch vs S3, we need to bear in mind that they share this fundamental similarity as both functions as standalone smartwatches.

No matter which one you own, you’ll be able to receive calls, messages and use apps that connect to the internet without your phone being near.

Both of these watches look inarguably similar and you’d be mistaken for thinking very little has changed in terms of design.

Samsung has retained its choice to opt for a more classic circular watch face design with rotating bezel. Both of these watches look strong and stylish, and in their overall aesthetic, they are hard to split.

The rotating bezel is not just an aesthetic addition. In both watches, it functions as an awesome navigation device.

Users can twist the bezel and use other gestures to navigate and use the watch’s various apps. It works very well on both watches and is probably Samsung’s key advantage on Apple.

The bezel is fun to use as well, it makes the watch feel like a true high-quality gadget.

The Samsung Gear S3 only comes in a 46mm version which is quite big for women and those with smaller wrists.

These smartwatches are already fairly masculine, largely due to the bezel which is highly reminiscent of Rolex watches.

The Samsung Gear S3 is still comfortable on the wrist but it is large, uncomfortably so for some people. 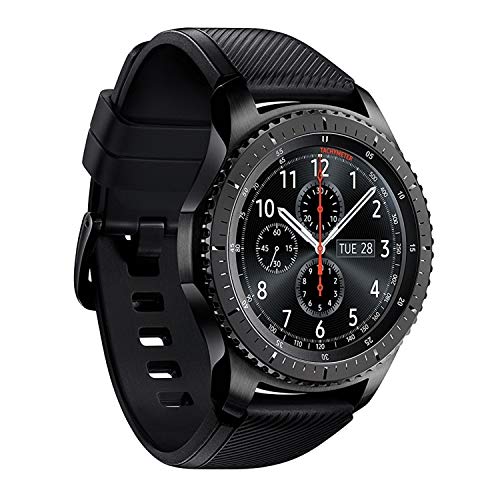 The Samsung Gear S3 also suffers from poor waterproofing. It is splashproof or waterproof to a depth of 5m for 30 minutes, but you wouldn’t really want to push it to its limit.

The major difference here is that the Galaxy Watch is available in 2 different sizes, 42mm and 46mm.

It might seem like a small difference but it matters for those with smaller wrists and it’s a very welcome change. 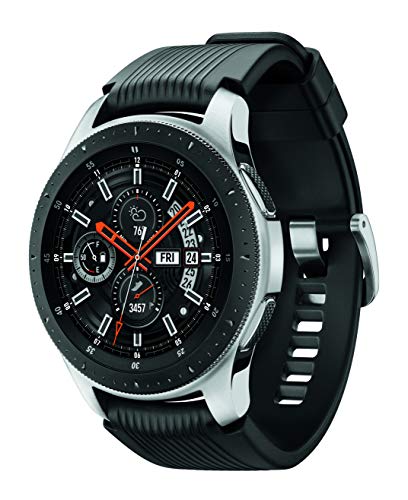 The Galaxy Watch shares most design features with the S3 but it is more comfortable and pulls off the bulky high-end watch look a bit better.

In terms of waterproofing, the Galaxy Watch draws an ace with its proper 50m depth waterproofing spec which means you can swim with the watch on.

This was a necessary upgrade to compete with the Apple Series 5 Watch.

Both of these watches a huge step up in looks from the Gear S2 smartwatch that headed Samsung’s offerings in 2016.

They’re mature, solid and make the right statement. They don’t scream smartwatch but they work well with modern fashion trends.

Of course, Samsung’s branding is present and well-incorporated but overall, Samsung hasn’t tried to detract from the watch’s own form and design.

It’s great that Samsung hasn’t overly branded their smartwatches and this gives them a more serious appeal.

Both of these watches are cellular-enabled standalone smartwatches. That means they can be operated without having a phone to hand.

The primary advantages are for users with lifestyles on the go where keeping a phone directly to hand all the time may be tricky or inefficient.

We have become too dependent on our smartphones as it is and a smartwatch gives us an opportunity to disconnect from social media and internet browsing while remaining connected to others.

Health and fitness have also emerged as key benefits of smartwatch ownership. For double or three times the price of a very basic FitBit, you can own a fully-fledged smartwatch with tons of extra features.

Both of these smartwatches use S-Health, Samsung’s health, and fitness suite. They can be used to automatically map exercises, count steps, distance, and calories, measure heart rate information, and more.

These are powerful tools that have transformed people’s lives, helping them keep on top of their routines, diet and stress.

It’s worth mentioning that whilst these watches are both fully-developed in the area of health fitness, the Galaxy Active2 smartwatch is the most-effective fitness-first model in Samsung’s current arsenal.

That said, there are fine lines of separation and all of these smartwatch devices make for powerful health and fitness tools.

Recommended: Which watch came out on top when we compared the Samsung Gear S3 Frontier vs S3 Classic?

The screens are also of near-identical Super AMOLED tech and are both 360 x 360 pixels with 16m colors.

In terms of apps and operation, the Samsung Galaxy Watch features a more powerful processor, jumping from the Exynos 7270 Dual Core 1.0 GHz to the Samsung Exynos 9110 1.15GHz dual-core.

That’s a big difference again and will sway many of those who were leaning towards the 42mm Galaxy Watch.

The Galaxy Watch tracks activities more accurately and will take heart rate variability (HRV) measurements to detect stress before prompting you to partake in deep breathing to relax and calm down. It can also track sleep patterns and quality.

Aside from basic hardware, the Gear S3 has a relatively poor battery life compared to many other smartwatches and indeed the Galaxy Watch.

12 or so hours with GPS activated simply isn’t good enough. For those who are training for long periods, spend long hours away from outlets or are on holiday, this level of battery life is hard to stomach.

The Samsung Gear S3 still has a lot of apps and the difference here is slight. But, the Samsung Galaxy Watch brings improvements in the form of its updated OS Tizen 4.0.

Samsung made major improvements in this key area. It can run for a week or so with light usage, add GPS and you might get 4 days again with sporadic usage.

With GPS turned on and heavy use, you’ll near the 24-hour mark. This is a big jump – almost double.

It’s worth noting that battery stats are considerably different for the 42mm Galaxy Watch which sees almost a 30 to 40% reduction in battery capacity.

The Gear S3 is no slouch but still, there is a clear victor here nonetheless.

The Samsung Galaxy watch has better hardware in every department other than its screen, where the two watches are matched (in the case of 46mm versions).

It’s quicker, more fluid and Tizen 4.0 has a cooler interface that works even better with the rotating bezel and other gestures.

Health and fitness are well-provided for in the Gear S3 but the Galaxy Watch’s newer version of S-Health adds more exercises and greater automation potential.

Samsung claim it has an ECG sensor that will be activated on the watch any time soon but the state of that is relatively unclear at this moment in time.

These two watches are evenly matched in some areas but the Galaxy Watch pulls through to 1st place in key areas such as battery life, hardware, and features such as the upgraded S-Health and proper waterproofing.

So, is the Galaxy watch better than the Gear S3?

When pitching the Samsung Gear S3 vs Galaxy Watch, it’s important to bear in mind that they’re separated by 3 years which is quite a lot in technology terms.

But, you’d have to say, for 3 years of innovation, the Samsung Galaxy isn’t mind-blowing in its progression.

It’s just tighter, sleeker, and incrementally better in several areas that really matter. These tweaks are very important and they do bring the Galaxy Watch into Apple Watch’s territory, making it a true opposition for 2020 and beyond.

Of course, the next generations of both are on the horizon and the battle lines will be drawn again. For now, though, the Galaxy Watch is top of the agenda for Samsung users and those who oppose Apple in favor of the Android family.

Yes, the Samsung Galaxy Watch like the Gear S3 is not an Android device but both still relate more to this ‘sphere’. Whilst they both inarguably work better with Samsung devices, you do not absolutely need them, which is great as Samsung could have easily made this a requirement for use.

The Samsung Galaxy Watch vs Gear S3 debate is a lively one when we take price into account. The Gear S3 is cheaper and coming down rapidly in price but there’s still only around a 30% price difference between the two.

Is it worth spending that extra 30% more? Yes, you definitely get value for the margin when opting for the Galaxy Watch, there’s no doubt about it.

Either way, you won’t be unhappy with either of these but you’ve got to say, the Galaxy Watch has certainly taken the helm of Samsung’s flagship and for good reason.