Michael Kors is a designer that likes to make a statement, and the Bradshaw smartwatch is no different.

The sleek design is what you would expect from Michael Kors and the technology held within stand up to the other well-known brands of smartwatch on the market.

Read through this Michael Kors Bradshaw smartwatch review to get an understanding of whether this is the perfect smartwatch for your requirement.

The Michael Kors Bradshaw smartwatch has received an upgrade in the processor department and now runs on the Qualcomm Snapdragon Wear 3100.

This processor is a new ultra-low-power system that has been designed with performance in mind.

It can deliver enhanced ambient modes while keeping a check on the power usage, improving the overall performance, and extending the battery life. 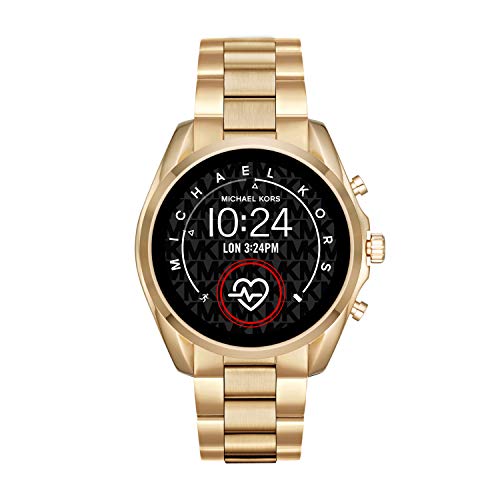 Wearers of the watch have not experienced lag when either switching between digital tasks on the screen or when using the action buttons.

The 1GB of RAM is one of the main reasons that this efficiency can be found, and the storage has also been updated so that users won’t have to worry about downloading their favorite Spotify tunes.

Battery life is always an important factor when choosing a smartwatch as we have to compromise between fantastic features and a battery that lasts a long time.

This smartwatch has found a happy medium with the ability to last easily throughout a day without needing to recharge, even with the Always-On displayed turned on and the brightness settings set to automatically change.

If you use the watch a lot throughout the day to take calls, check social media, and especially if you use the GPS a lot, you may find that the battery runs down during the day and will need a quick recharge when you have some downtime.

Recommended Next: Is the Xiaomi Amazfit Bip smartwatch a true Apple killer?

This is similar to most feature-packed smartwatches, and what the Michael Kors Bradshaw has done to compensate for this is to provide a Rapid Charge option.

In 50 mins of charging, the watch will get to 80% battery life, meaning you can carry on using your smartwatch however you like.

As with any watch designed by Michael Kors, the Bradshaw is one that is have been created to show style and elegance.

It is bold and unapologetic in its chunky casing, something that won’t appeal to some people if they prefer to have a less obvious watch or something a little more discreet.

However, Michael Kors fans and anyone who like a statement watch will be drawn to this one.

The Michael Kors Bradshaw smartwatch is almost identical to its analog counterpart, which makes the watch a perfect compromise for someone who wants the functionality of a smartwatch but not the modern, digital look.

The watch bands can be changed, which adds to the ability to be able to customize the timepiece to suit your needs and any occasion that you may be wishing to attend.

A range of official Michael Kors Bradshaw smartwatch straps are available in silicone, leather, or steel. 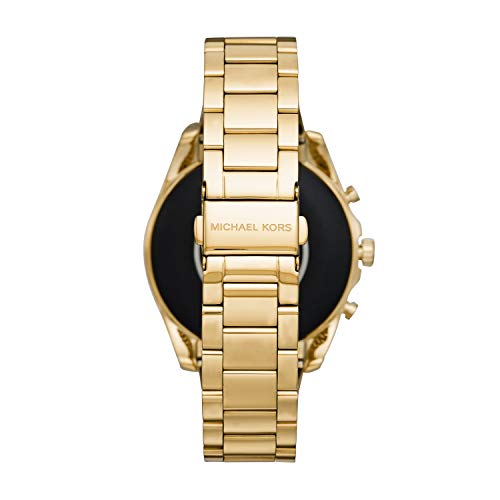 As you would expect from a high price smartwatch, the display is exceptional.

Held within a 44mm casing is a 1.28-inch AMOLED display that provides vibrant colors that contrast with deep blacks, and it incorporates the Always-On display that is demanded by smartwatch wearers.

The designers of this smartwatch clearly respect individuality as they have made pretty much everything customizable.

Recommend Reading: Are smartwatches still worth it in 2022?

The MK Access app allows for a multitude of customizations to happen that can ensure your watch matches your outfit, and to go even further, My Modes and My Social allow the wearer to change faces at certain times of the day or set social media pictures as watch faces.

Watch screens on previous Michael Kors smartwatches have sometimes disappointed as they have not always been as crisp as would be expected for the price tag.

With the Michael Kors Bradshaw, that is no longer an issue. There is a fantastic amount of customizable watch faces to choose from, and each looks excellent.

It really does come down to a personal choice about the wearer finds to be the best option for their needs. 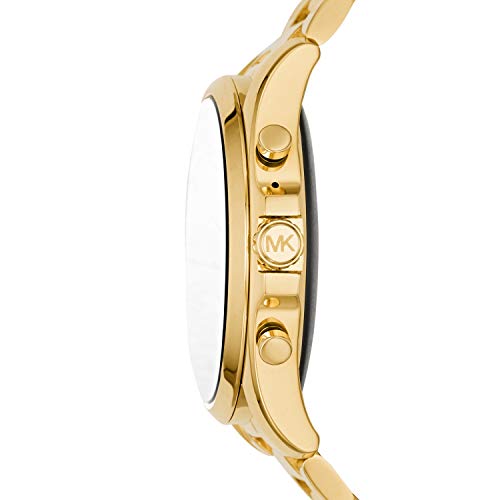 When it comes to apps, there is no reason to miss out on any of the latest smartwatch offerings as the Michael Kors Bradshaw smartwatch is compatible with Google Play.

Having access to Google Play means wearers of the Michael Kors Bradshaw are able to download any compatible app within the Google Play store.

Whether a user wants to make the most of the in-built fitness features and download a range of apps to help motivate them to exercise or keeping up to date with social media is more important; the wearer has a range of options to choose from.

Music is great on the Michael Kors smartwatch as, unlike many of its competitors, the Bradshaw has in-built speakers.

This makes Spotify a perfect app to have on this smartwatch, and as an added bonus, there is enough storage to allow for storing songs to be played when not connected to its synced smartphone. 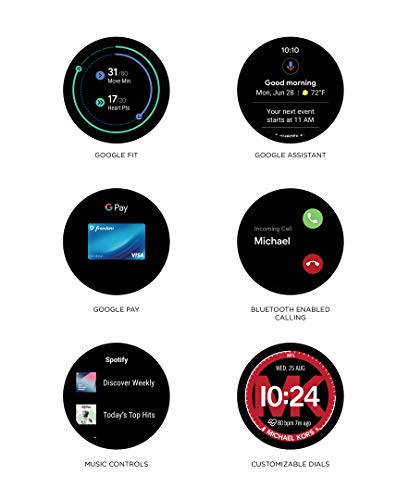 The Watch runs on Google’s Wear OS platform, which has been upgraded and improved significantly. The interface is intuitive and easy to navigate.

Swiping left to right allows for Google Assistant to open and be interacted with, and swiping right to the left opens the Google Fit app.

Moving away from the touch screen, the engraved rotating crown will give the wearer the ability to scroll through the apps while the top and bottom buttons are customizable but default to opening the MK Access app at the top and Google Fit at the bottom. 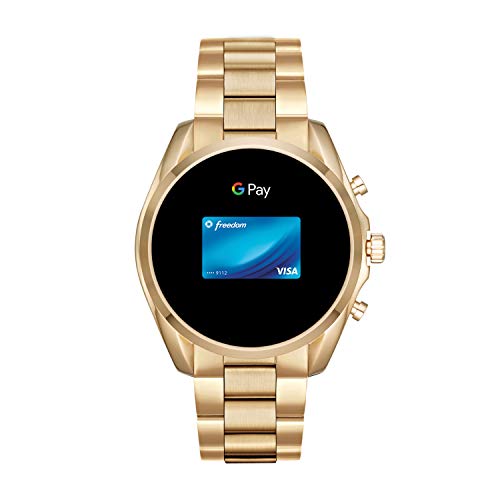 The watch has a waterproof rating of 5ATM or 50m. This is an upgrade from the previous generation which was only splashproof. The current generation 5 is swim proof.

The watch is fully compatible with Google Assistant and Google Pay. You can, therefore, use your watch instead of having to hunt for your purse when you are in a store picking up a coffee.

GPS has definitely become a must in any self-respecting smartwatch, and the Michael Kors Bradshaw offers this system so that you can take it with you and analyze your journey later.

It’s a great addition for anyone who wants to use the watch alongside their fitness regime, and you can even deploy Google Fit to help you hit your prime.

This lets the design down slightly as the plastic doesn’t fit with the luxury of the rest of the watch. However, it should be remembered that this will not be seen where wearing so it shouldn’t put anyone off too much.

Although the watch has a built-in heart rate monitor, it still is not the type of watch that you would necessarily wear to the gym.

The design simply isn’t the same as other smartwatches such as the Apple Watch, Garmin, or Fitbit, where fitness is a key component.

Whilst the straps can be changed, and so a silicon strap could be substituted to make for a more comfortable feel, the luxurious design will be lost, and the watch is still likely to be too chunky to be a genuine contender as a fitness smartwatch. 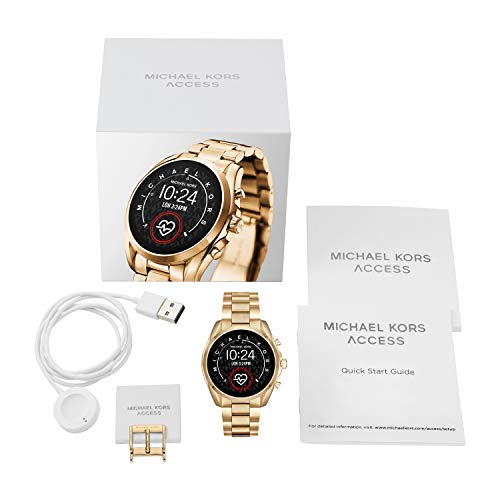 The watch runs on the Google Wear OS platform, so there should be no surprise that Google Assistant comes as standard, and syncing to an Android phone is simple and easy to achieve.

With a speaker on board, you can also hear the Google Assistant responses out loud, which is a great feature.

iPhone users shouldn’t be dismayed though, as the Michael Kors Bradshaw is also compatible with iOS and will happily sync with an iPhone, making it a fantastic alternative to an Apple Watch for anyone who wants to keep the traditional watch look.

The only issues that seem to be experienced in terms of compatibility are that connection sometimes drops when connected to an older type of smartphone. Any relatively new phone should not experience issues.

There is a wide range of pros for you to enjoy; it’s a statement piece that looks like a traditional watch as supposed to a smartwatch, it’s full of features to make your life easy and is compatible with both Android and Apple.

This is a truly great watch that would impress even the biggest smartwatch critics.

There aren’t many cons to this watch. The price tag may put some off, and the chunky design won’t be to everyone’s taste.

However, they are issues that come down to personal choice rather than flaws in the watch.

The other potential con is that the watch comes with numerous fitness features on board, which are great smartwatch additions.

However, the design of the watch does not lend itself to being used during fitness activities. It is, therefore, packed full of features that may not get much use.

Michael Kors Bradshaw watch reviews have shown that there are plenty of reasons to get this luxury, elegant and intuitive watch.

If you are already a Michael Kors fan, then this edition will certainly not disappoint. Small niggles such as not quite crisp displays in previous incarnations have been sorted out, and the same huge catalog of customizable watch faces are on offer.

If you aren’t yet a Michael Kors fan, then this watch is likely to convert you. People who want the functionality of a smartwatch but don’t want to give up the stunning design of an analog watch have found the perfect compromise in this Michael Kors Bradshaw smartwatch.

It is packed full of digital features but looks and feels like the regular analog version.