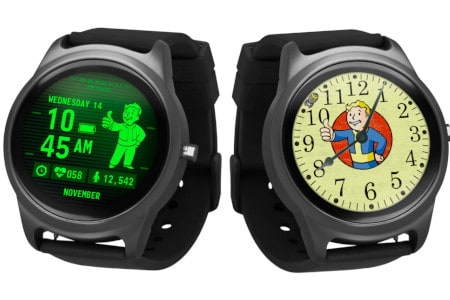 When a video game series becomes successful, it naturally follows that a whole range of merchandise gets released.

Makers of the game want fans to buy into the products to make a profit but also as a way of advertising their game.

A watch is a great way of advertising as it’s something people take with them and wear, giving more opportunity for others to see the product.

A Fallout smartwatch is, therefore, a great item of merchandise from a developers’ point of view, but is it just a novelty item for hardcore fans to say they own, or is it worth buying as a genuine functional smartwatch?

Read through our Fallout smartwatch review to find out more.

The Fallout watch is advertised as a Superfan Smartwatch and the “Pip Boy experience you’ve always wanted.”

The watch itself is a matte gunmetal grey made from zinc alloy and polycarbonate whilst the watch strap is a 22m width, black, silicone strap that, when combined with the watch case, makes the weight approximately 53g.

The display screen of this superfan Pip Boy watch is a standard 1.28 inches, giving the wearer a decent view of the functions that the watch has to offer.

Recommended: Is the Michael Kors Sofie smartwatch as practical as it is elegant?

Even for the most dedicated Fallout fanatic out there, having a smartwatch that doesn’t connect to well know devices would be pretty pointless.

Luckily, this vault-tec watch has no problems with connecting and syncing to both iOS and Android devices.

The connection is via Bluetooth, which happens to be reliable; however, the one61 website does have a disclaimer that the watch is not compatible with some Motorola devices.

Therefore, it is important that anyone looking to buy the watch makes sure their phone is compatible before parting with any hard-earned cash!

For those with iOS or Android devices that are compatible, the phone’s voice assistant can be integrated as well as the users’ contact list, phone dialer, and calls log.

Recommended Next: Is a smartwatch still a worthwhile investment?

Obviously, the battery life depends on how much you use the watch and what type of features you are using it for. With standard usage, the battery is expected to last between 16-18 hours.

However, in reality, it’s less. Take a look at the video above where it lasts just 12.5 hours on a full charge.

This is not great compared to other smartwatches on the market, but for anyone who is happy to charge their watch regularly, it shouldn’t cause too much of a problem.

As with most smartwatches, including vault tec watches, this Fallout version comes with a range of digital features. Numerous features come as standard with the watch that you would expect to find.

The watch can be set up to receive notifications that would usually arrive on the users’ smartphone, including text messages.

Where the Fallout 4 watch falls down compared to other smartwatches is that the notifications are generally just sent to prompt the wearer to pick up their smartphone and engage with whatever the notification was for.

Some device connections will allow the watch to send messages, and all will allow for the reading of messages through notifications on the watch.

However, again, the one61 website carries a disclaimer about compatibility. It states that iOS and CDMA networks will not allow the watch to send or reply to messages.

For anyone who wants that functionality on their smartwatch, they will need to look elsewhere.

Wearers of the Fallout smartwatch can enjoy finding out about the weather on their device as well as having access to their calendar to keep up to date with what they should be doing.

The watch can also be used to control music and the camera on the synced smartphone and a very handy feature of being able to find the phone that the watch is connected to if it is mislaid.

Alarms can be set on the watch, which can wake the wearer up via the speakers or by using the haptic output optical sensor to alert the wearer silently.

A stopwatch and timer are also easily accessible, and the watch can be placed in a Do Not Disturb mode to ensure no notifications, alarms, or anything else disturb the wearer when they don’t want to be.

The Pip Boy smartwatch comes complete with a step tracker and move alert for when you’ve been sitting for too long and need a prompt to get up!

The watch will also monitor the wearer’s sleep if it is worn overnight. This can be problematic due to the battery life as most users will find they need to charge the watch overnight, and so their sleep cannot be tracked.

A heart rate monitor also comes as standard, so while the wearer is tracking their steps to make sure they are exercising enough, they can also ensure their heart rate stays within a healthy range.

This Fallout smartwatch review proves that this smartwatch is certainly not just a novelty piece of merchandise that hardcore fans will buy and never use.

The functions and compatibility are very much in line with other smartwatches that carry a similar price tag so the user won’t just be paying for the Fallout brand, they do get a decent, functional smartwatch.

The wearer will enjoy many functions directly on their wrist, and for things that aren’t compatible, the watch will usually alert the wearer that they need to grab their phone.

That being said, even for the biggest Fallout fans, the features may not be enough to satisfy those who want a truly compatible, fully functional smartwatch.

It definitely isn’t a rival to well-known brands such as the Apple Watch, Garmin, or Fitbit. However, it doesn’t market itself as such.

Anyone who wants that type of functionality needs to jump into a much higher price bracket.

For what it is, the Fallout smartwatch is great and delivers exactly what a Fallout fan would expect!

Just remember it’s purely for fans of the series.